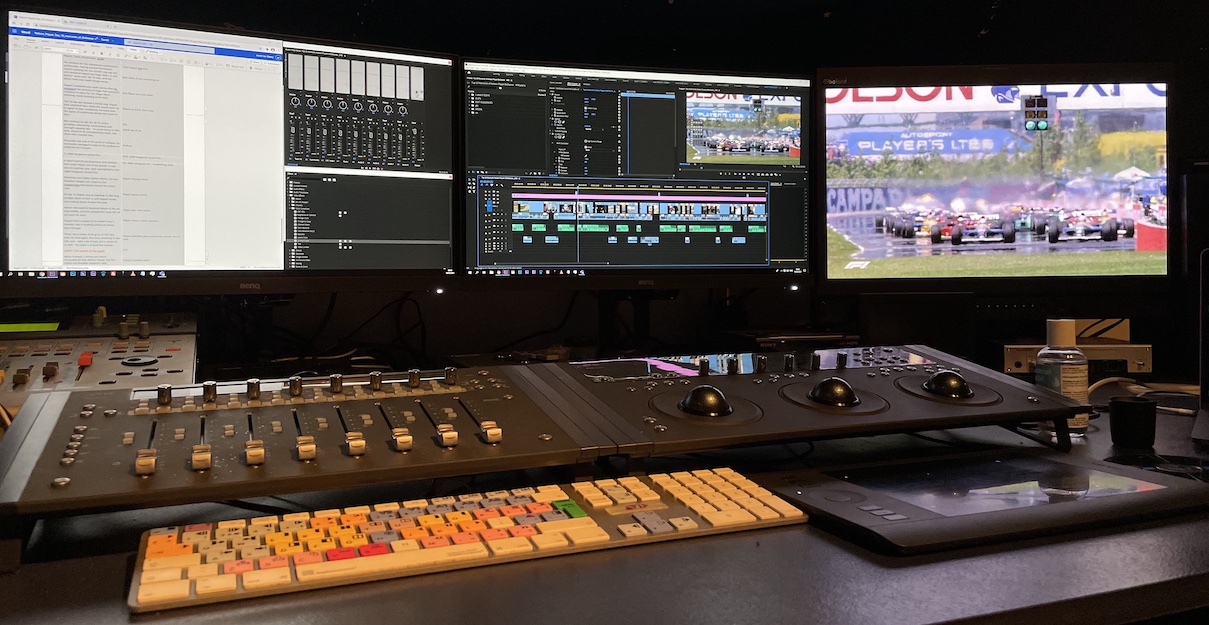 Splice Media has been producing content for Formula 1 by editing remotely in the Annex, the abilty to access FOM's rich archive by conecting directly to a remote PC has made this process easier. With 3 screens and full screen playback it's as if you were physically in the building.

Splice Media's Amrit Fox-Bharry has recently completed a fast turnaround 6 part documenatary on George Michael for CH5, the whole edit was cut remotely with the media and cpu in Manchester and producer in North London and the edit in Kent! It's due to air on Christmas Day.

We created a series of 3 films for British Superbikes and Eurosport, directed by Greg Wood, the films were set around a poker table with the top 5 riders taking their chances for the season final!

A lot of research and love went into creating this 44 second video for F1 (FOM). After selecting possible shots to match they were stiched together using Afterfx to create this very special film.

Fanview's Stuart Collier asked Splice Media's Amrit Fox-Bharry to remotely edit 3 features for Red Bull's 6 week tournament. Combining top live action with analysis, chat and interviews, Red Bull Take Down The Crown offers four promising players from across Europe the opportunity to shine in the (virtual) Red Bull arena and fight for the right to take down the crown of a 'Champion' of the game 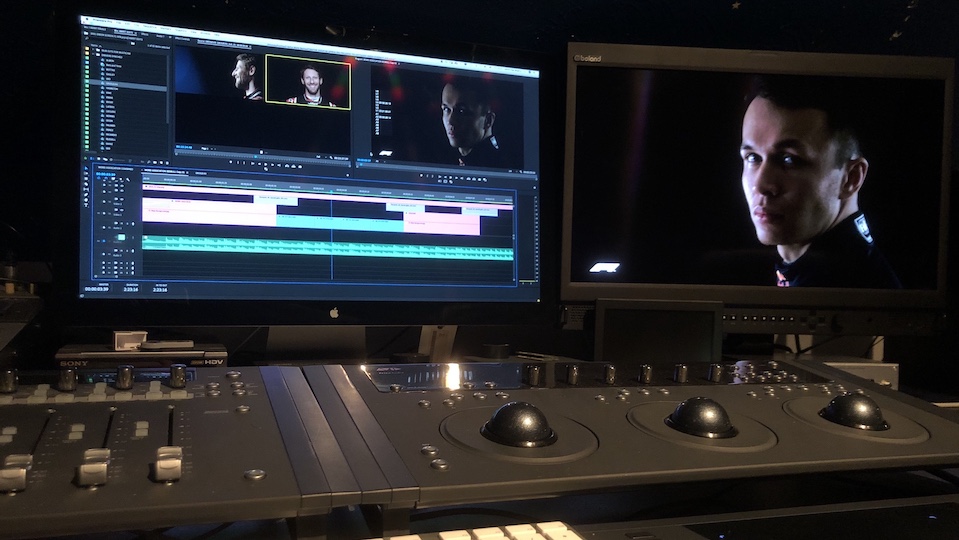 Splice Media continued to edit content for Formula 1 during the Covid-19 Pandemic using their facility located in the Annex. 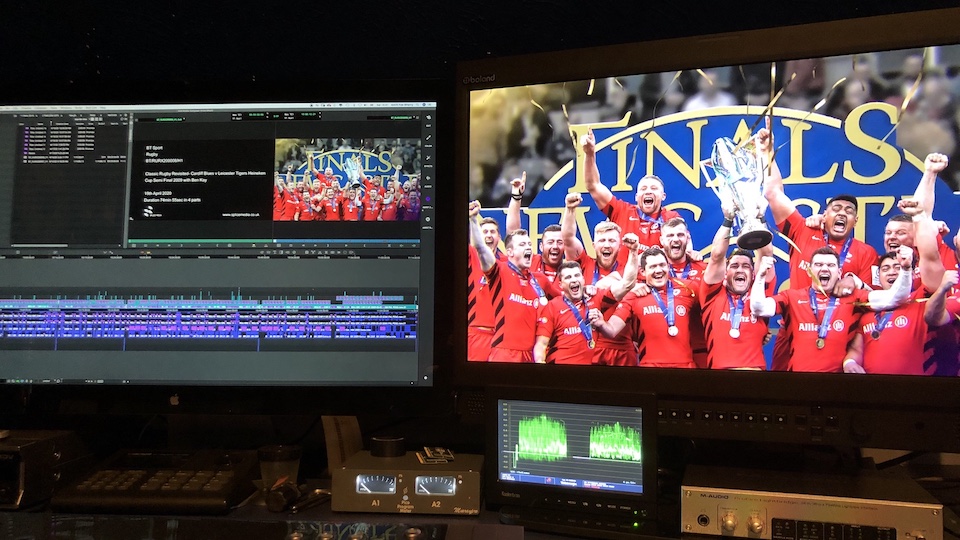 Splice Media edited Classic Rugby matches for Sunset & Vine during the Covid-19 Pandemic. Social Distancing and the early days of lockdown, meant voice overs were recorded across the UK and the editing was done at Splice Media's Annex Facility using a combination of NDI and secure video conferencing to allow the production team and editor to work. 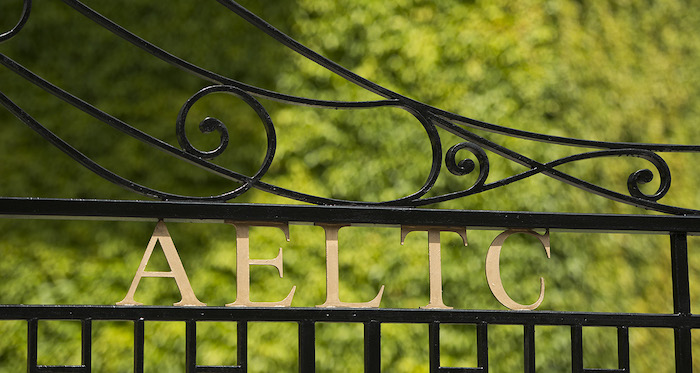 Splice Media has re-organised and catalogued the clubs vast archive to help speed up the production workflow during the 2020 Championships. 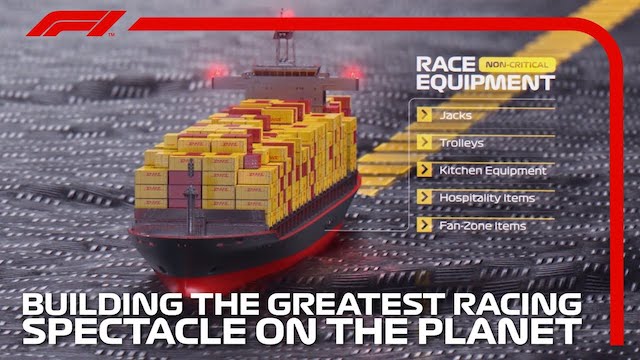 Splice Media's Amrit Fox-Bharry produced/edited, this epic film showcasing the vast amount or work behind the scenes during a season of Formula 1.

Liberty Global commissioned Splice Media to produce a film showcasing their new Wi-Fi testing facility. It's the largest of it's kind in the world and has two, three story town houses built inside a shielded warehouse. 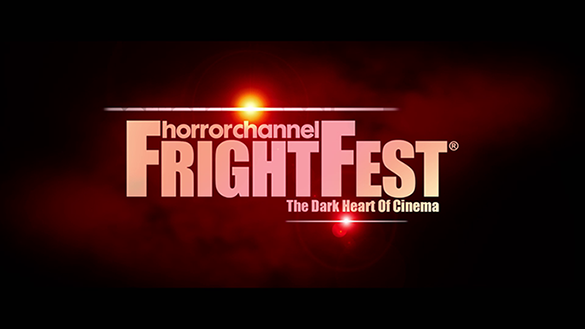 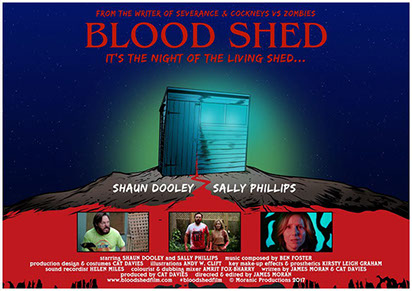 James Moran and Cat Davies, contacted Amrit to see if he would be interested in grading and dubbing their short film "Blood Shed' starring Shaun Dooley and Sally Phillips. We were extremely excited to be involved in this project and the short film is winning awards at festivals around the world!

Whisper Films', Richard Gort, asked Amrit Fox-Bharry to edit the closing film for this seasons F1 coverage for CH4. The multicam shoot was cut on Premiere Pro. Several takes were synched and grouped, before being stacked and then cut as a live vision mix, the edit came together quickly with motion tracking using Mocca and compositing using AfterFx. Richard Gort and Amrit Fox-Bharry have a long working history and have produced many award winning films together.

Splice Media sponsors FrightFest 2016, we are proud to continue our involvement in this incredible film festival. Amrit Fox-Bharry has produced and edited the official FrightFest promo and this year we have a main screen.

Splice Media's, Amrit Fox-Bhary edited the awesome promo for CH4's launch of Formula 1. Director, Richard Gort of Whisper Films, and Amrit have worked together on many projects and Amrit edited his first ever promo at the BBC and it was only fitting Richard asked Amrit to help him realise his epic vision for his first project with Whisper Films. 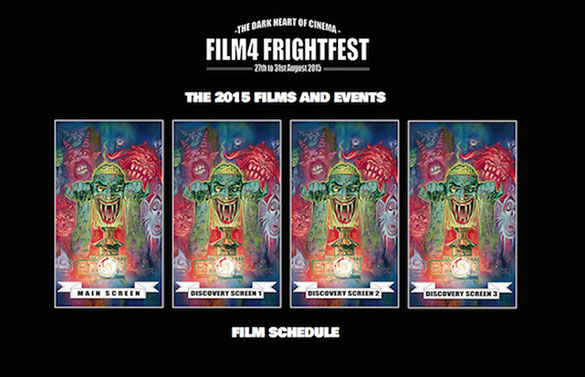 Splice Media is proud to sponsor FrightFest 2015, this year we have our own screen playing some fantastic films.

Loving the Avid Artist Control Surfaces, working flawlessly with Avid 8.3 with 4k and UHD. Our largest corporate client Liberty Global is putting our suite through its paces with their new film, all shot on Red Epic.

Amrit Fox-Bharry has just finished editing a new series 'Freshers', for Mentorn Media. Where we follow a group of students at the University of Bedfordshire as they move away from home and learn to survive standing on their own two feet. In this three part series we see what university life is really like and what they get up to. There will be partying and socialising as they work out how to fit in, whilst carving out their own identity and coping in an entirely new environment. It can be a daunting experience as the freshers leave home for the first time and have to learn to look after themselves. We follow ladies man Max, 18 from Nottingham, loveable Forrest, 18 from Luton, glamorous Anita, 20 from London, horse loving Abbie, 19 from Essex, hip hop performer Jay C, 18 from London and daddy's girl Bayleigh, 18 from Colchester as they embark on the most exciting and significant three years of their lives. From the unparalleled highs to the unexpected lows, 'Freshers' will explore the daunting reality of university and just how hard it can be out there in the big wide world. The first episode airs on Wednesday 16th October at 9pm on ITV2 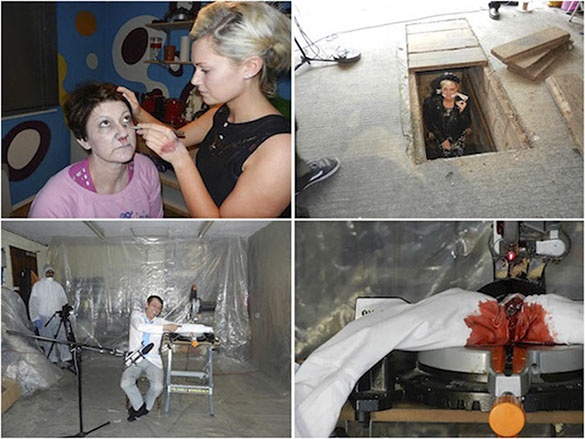 Him&Her Films is a new production company owned and run by Splice Media Ltd. Totally Human, is their first short film, written and directed by Amrit Fox-Bharry and produced by Leonora Fox-Bharry. We were lucky enough to have our friends help us with this project, including a budding theatrical makeup artist who was also willing to climb into the pit and a chop-saw victim who trusted us not to actually chop his arm off! It premiered at London's FrightFest 2013. 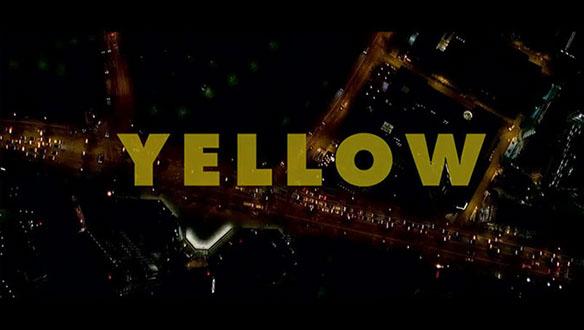 Paul McEvoy has yet again secured exclusive interviews with Ryan Haysom (Director, Yellow) Catherine Morawitz (Producer, Yellow) and Antoni Maiovvi (Composer, Yellow), for a short feature to air on The Horror Channel. The interviews were shot at the world famous Sitges Film Festival and give us an insight into its unique style. Amrit Fox-Bharry edited and graded the feature on Avid Media Composer.

The Horror Channel's, Paul McEvoy, recently secured exclusive interviews with the cast of the new Evil Dead film. Splice Media's, Amrit Fox-Bharry, was proud to be asked to edit this 8 minute feature for The Horror Channel. Paul and Amrit have worked together for a long time and have built up a strong working relationship. 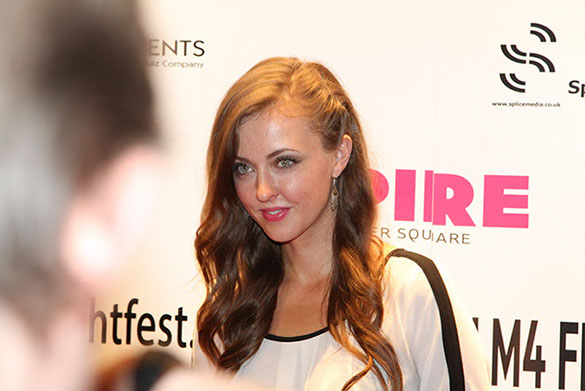 Splice Media is proud to sponsor FrightFest 2012. This is a unique horror film festival, spanning 5 days over the August bank holiday. With more movies, more variety, more premieres, more previews, more guests and just more, more, more... FILM4 FrightFest the 13th is delighted to unveil its most ambitious line-up in history. From the sensational SINISTER starring Ethan Hawke, the Sam Raimi produced THE POSSESSION and Jennifer Chambers Lynch's jaw-dropping CHAINED, to the MANIAC remake, the surgical underground of AMERICAN MARY and the V/H/S anthology everyone is talking about. It's time for some paranormal hacktivity and anger games as we salute the cream of the screams 2012. FrightFest 2012 was an amazing experience. We were so proud to see the Splice Media 'Switch Off Your Phones' films on the big screen. They looked and sounded fantastic. We have been lucky enough to watch some great films including 'Sleep Tight'. The media wall has been lifting the Splice Media profile with our logo at head height!

Amrit Fox-Bharry and Splice Media have been chosen by the Horror Channel to edit a new monthly programme starting Emily Booth. The new strand involves a large amount of blue screen and Amrit used Boris FX pluggins to create a clean key.

Amrit Fox-Bharry was asked by Dave Baker to edit 10 high end films for Disney. The short films involved creating an interesting and exciting visuals to illustrate football free styling. Amrit created a high gloss look to the films by using Avid Media Composer 6 with the Boris plugins. The films were further enhanced by adding sound fx from the extensive Logic Pro library. 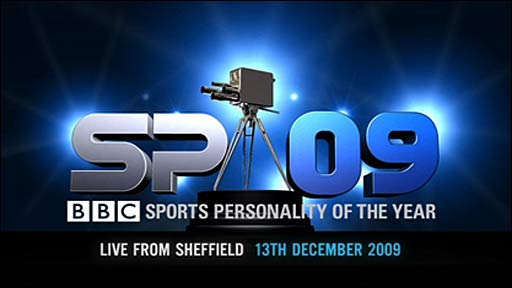 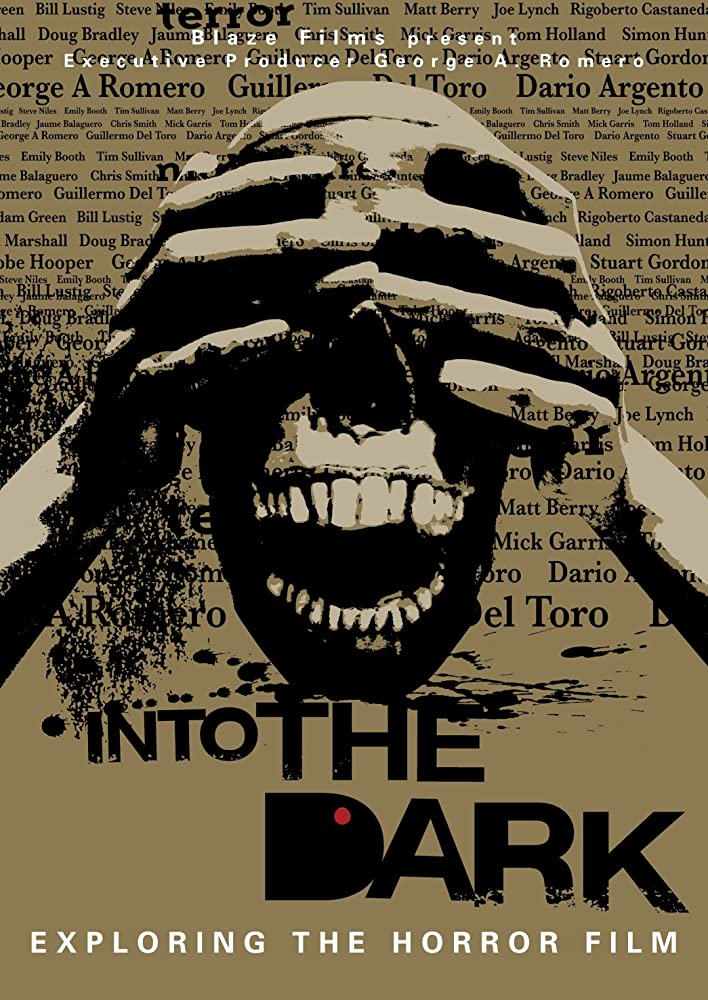 Splice Media's Amrit Fox-Bharry is working with Blaze Films' Johanna Salomaki on a new documentary called, 'Into The Dark'. George A. Romero, the legendary LIVING DEAD director, joins forces with Blaze Films to executive produce INTO THE DARK, a startling, far-reaching exploration into the horror fantasy genre and the reasons behind the scares. The most comprehensive line-up of horror movers-and shakers ever assembled is your mainstream guide on an in-depth journey through the multifaceted unknown to unlock the secrets of the most profitable genre in cinema history. Interviews include: Guillermo Del Toro, George A Romero, Stuart Gordon, Tobe Hooper, Dario Argento, Clive Barker, Tom Holland, Mick Garris, Neil Marshall, Christopher Smith, Jaume BalaguerÃ³, Doug Bradley, Steve Niles, Darren Lynn Bousman and many many more. 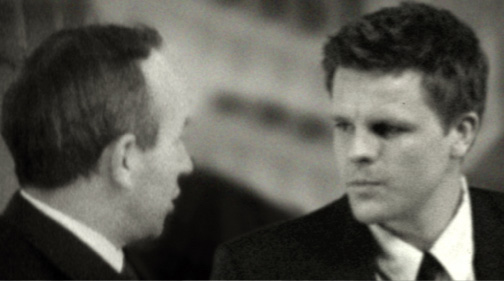 BBC's Richard Gort has asked Splice Media to edit the preview item for the Monaco Grand Prix. The item consists of archive footage with presenter interaction. All the compositing will be done by Julian Gibbs from Intro. Richard Gort said, 'Splice Media's Amrit Fox-Bharry is the only person I would feel comfortable working with on this exciting project.' 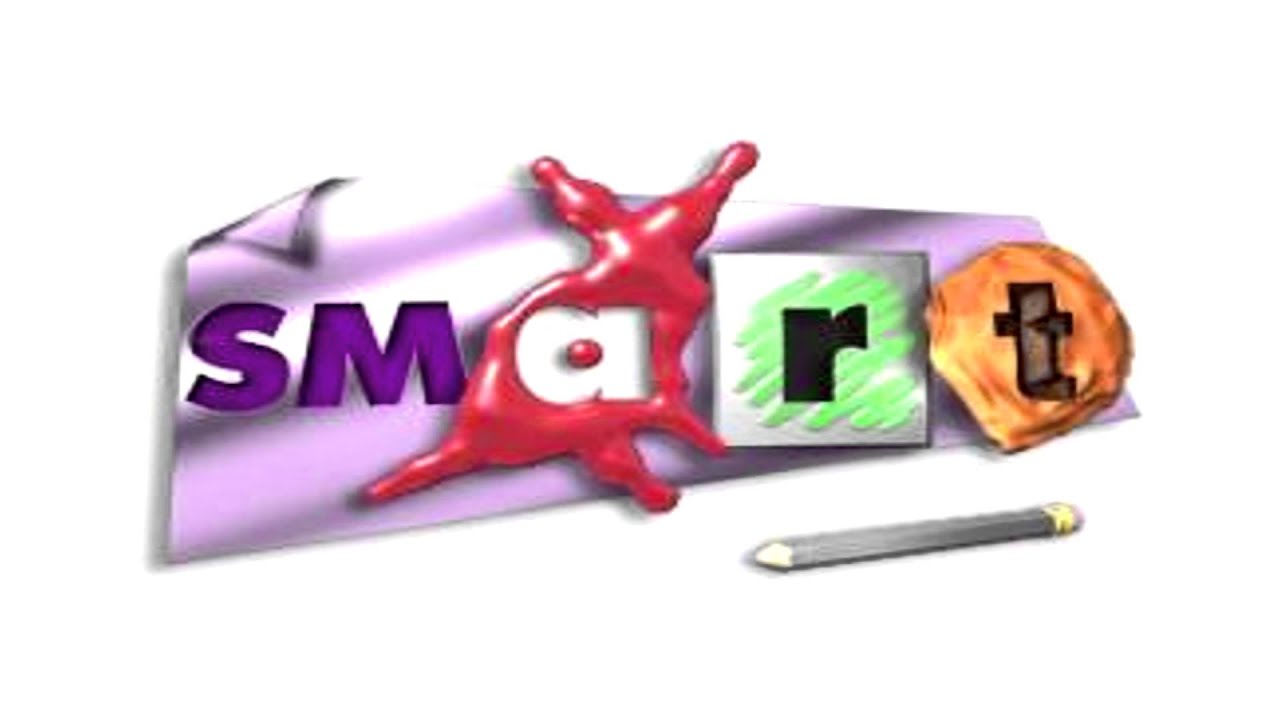 Amrit Fox-Bharry has just completed the Offline and Online on the new series of the popular children's programme Smart. 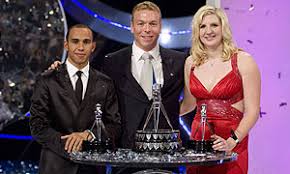 Once again, BBC's Richard Gort Has asked Amrit Fox-Bharry to edit the opening titles for the BBC's prestigous Sports Personality Of The Year. As well as editing Amrit Fox-Bharry will be creating the final mixed audio track which will be done using a combination of Avid Media Composers Pro Tools Plugins and Sonar 7. This will allow Amrit to blend the multiple tracks into either a full surround mix or a standard stereo mix. As the titles contain footage from multiple sources this method should give the best workflow and most creativity. 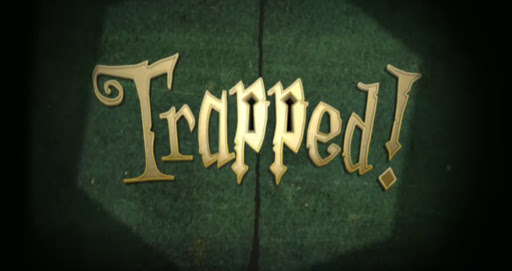 Trapped is an adventure game show with a twist! Splice Media's Amrit Fox-Bharry has just finished editing 13 episodes for CBBC. 'Thanks again for all your hard work on Trapped. I hope to work with you again some day soon. Working with Amrit has been fantastic - in particular his technical knowledge and devotion to the project has been invaluable. I would work with him again in an instant.' Producer: Rob Hyde Set in a gothic, fairytale world 6 children arrive at the top of a terrifying tower. They must battle it out to escape being Trapped - for there can only be one winner, and there's only one way out! The twist? One of them cannot be trusted, but which one is the saboteur? 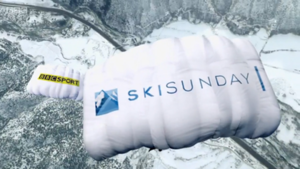 Splice Media has just completed editing a new title sequence for the BBC's Ski Sunday. Producer Richard Gort said 'Senior Editor Amrit Fox-Bharry was the obvious choice to create a high energy, fresh look for the show. Having worked together for over a decade I new Splice Media would not disappoint.' 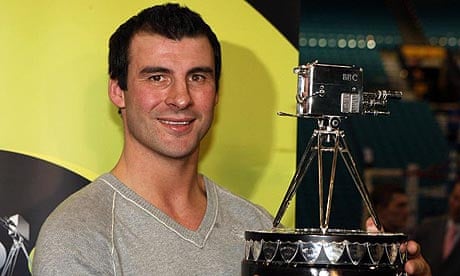